Ever been driving and wondered to yourself what the laws about cell phone use while driving actually are? Though each state’s laws vary slightly, here’s an overview of what you need to know about cell phone laws in Florida.

Talking on a cell phone is legal while driving in Florida, which means you can feel free to call friends and loved ones without fear of being ticketed or fined. However, texting while driving is illegal in Florida.

However, police are prohibited under Florida law for pulling over a driver specifically for irresponsible cellphone usage. This is because texting while driving isn’t a primary offense, so it’s not enough of a reason to pull someone over on its own. As a secondary offense, an officer can ticket you for irresponsible cell phone use if you’re being cited for another offense such as speeding or running a stop sign.

In 2017, there were more than 3,700 accidents linked to drivers being distracted by phone conversations on the road, which is a staggering number when you consider the total cost of those accidents. The National Institute of Health found that talking on the phone while driving decreases your reaction time by as much as 40%.

A recent viral Facebook post in Florida indicated that Florida passed a new law allowing officers to ticket any driver they witness even holding a cell phone while driving, citing a potential fine of $250 for anyone in violation of this new “law.” As major news outlets have reported, this post is fake.

A law in Georgia recently made using a cell phone while driving a primary offense, no such law has been enacted in Florida, and you can only be ticketed for texting while driving if you’re stopped by a police officer while breaking another law.

The Florida Highway Patrol has issued a series of Cell Phone Tips for drivers that will help you stay safe on the road and avoid a traffic ticket. Here are some of their key pieces of advice.

Distracted driving puts your life and the lives of those around you on the line. If you’ve been in an accident at the hands of a distracted driver, give us a call to explore your options and your rights. 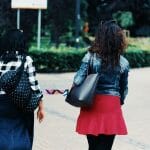