5 Reasons You Shouldn’t Do The Kiki Challenge

Police officers and local officials have warned people against performing the viral video challenge known as “the kiki challenge.” The challenge features participants dancing to Canadian rapper Drake’s hit song “In My Feelings” and posting the videos to social media, and while the challenge started out innocently enough as a way to showcase dance moves, the trend has spiraled into the realm of dangerous content that has left many in the hospital.

Though the craze began with the Drake song, the rapper isn’t the originator of the dance trend. It went viral after comedian Shiggy posted a video of himself dancing to the song on Instagram. Although his video involved no illegal or dangerous activity, the trend spiraled from there.

As competition to get more hits mounts, participants have adapted the challenge to involve jumping out of a moving car and dancing along to the song as the vehicle rolls down the street. This dangerous behavior has to lead to car accidents, theft, and hospitalization as dancers lose control of their vehicles.

If it wasn’t obvious enough why jumping out of a moving vehicle is a bad idea, here are a few key points.

Leaving a moving vehicle unattended is a crime, and so is distracted driving. On top of that, filming yourself while you commit a crime and posting that video to social media it is an especially bad idea, from a criminal incrimination standpoint.

You Can Be Fined

In Florida, you can be fined for as much as a thousand dollars for performing stunts around moving cars, and depending on the situation, you could be recklessly endangering those around you. Unfortunately, no amount of Twitter views will pay your fine or your bail.

Participants in the Kiki challenge have been filmed fracturing their jaws, being hit by cars, and running into things in the course of filming the challenge. These injuries can have lifelong effects, and any activity that involves walking on a busy road is a huge hazard to your health.

Anna Worden is one such injured person who had to be sent to intensive care after she attempted the challenge. Worden fell when she got out of the car, fracturing her skull and inducing bleeding in her brain.

Is there a more distracted type of driving than physically getting out of the car? The National Transportation Safety Board doesn’t think so, tweeting an urgent warning to avoid the challenge.

It Isn’t What The Creator of The Movement Wants

Shiggy, the comedian responsible for starting the trend, has publicly stated that he doesn’t support the idea of people getting out of moving vehicles. He has advised fans to stop jumping out of cars for viral content.

While dancing is a great pastime that almost never hurts anyone, the dangerous version of the KiKi challenge is dangerous to yourself and to others. Keep dancing, but remember to do it safely! 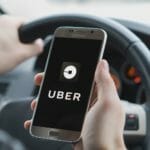 What Are Your Rights As An Uber PassengerPersonal Injury Assistance